We all know November is often seen as a very important month in the finance world. Why? Well, probably not because it is the month I was born (other than to me); more importantly in the finance world, it is when the best period for the markets begins.  The stretch runs from November to April with the 1st half of those usually the stronger segment.  The seasonality we see there has been going on for a long long time, but as with any type of seasonality, it is not infallible and often gets trotted out to prove a narrative versus just being used as one data point to factor in.  This year alone we have seen many holiday seasonality norms turned on their heads like happened Thanksgiving week, only to rebound shortly after while many sit disappointed and miss the opportunity.  This is not mentioned to shame anyone, but instead to point out how hard this market actually has been this year.  So if you are having a tough time, keep at it and work your opportunities the best you can and keep an open mind.

November in the markets didn’t disappoint this year as the month started off weak in continuation of October.  Shored up the breadth picture during the middle of the month, and then ended with a strong move off the lows.  It was not just a very volatile month, but it also felt important in a few ways we will discuss below. I apologize for the length of the post, but I am going mix both the top down view along with some breadth figures to add to the argument.  I will also try to address both the bullish and some bearish arguments based on what I am seeing in these charts  So, lets jump right in and start with a top down view of the markets. 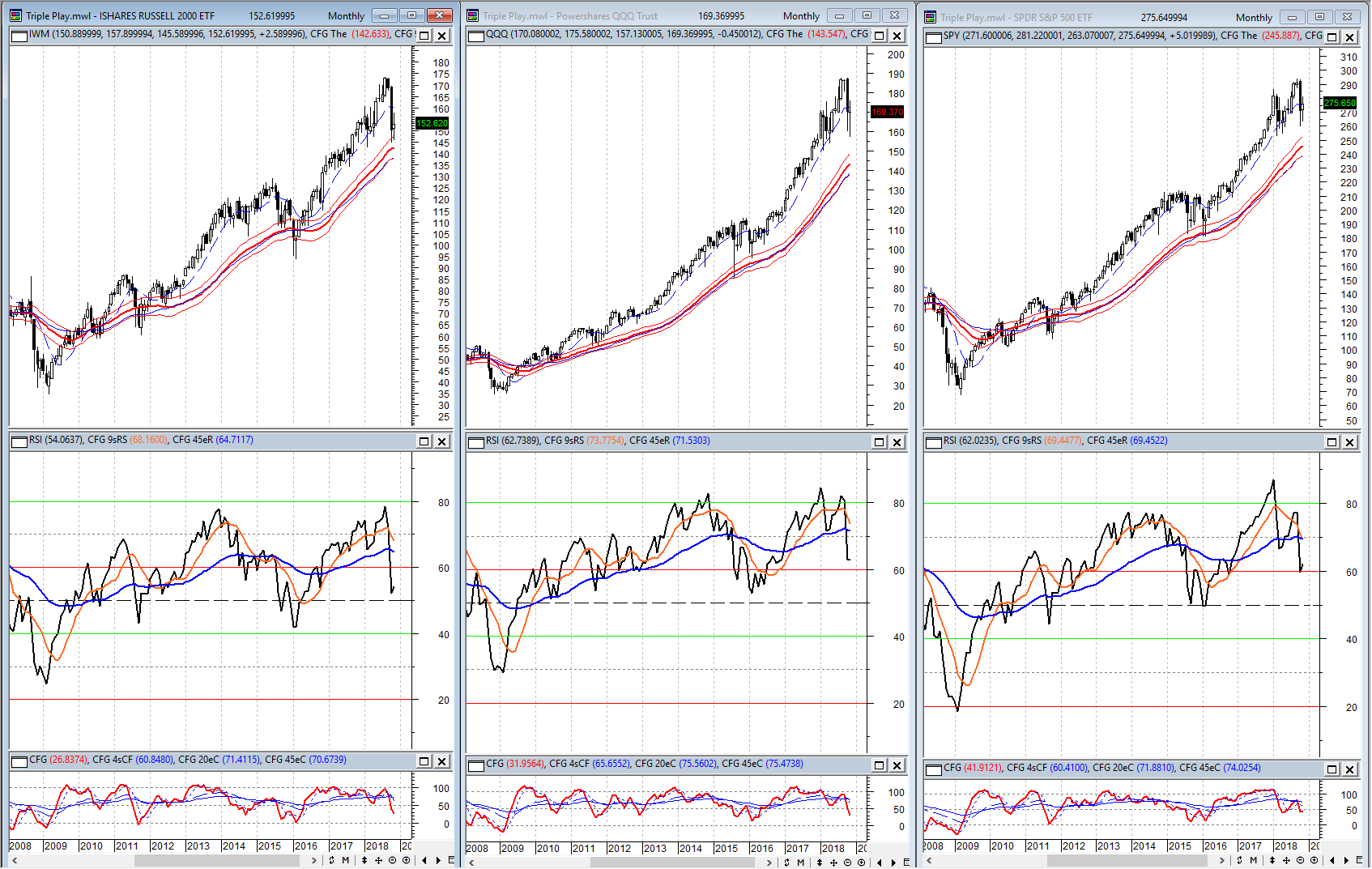 Starting with a long term Monthly chart going back to 2008 before the large trend started zooms out enough to put the latest run and correction in context.  So far it has been a sharp drop registering with some of the larger ones we see on the chart, but overall it still sits in a strong RSI bull range and above rising MA bands with the longer term uptrend shaken, but intact.  RSI had gotten elevated as priced extended further from the MA bands which came to an abrupt end in October and early November.  The swiftness and severity was in some measures hitting extremes rarely seen, while others didn’t even get stretched or tested. Yet during this the sentiment certainly got tested with heavy rhetoric on both sides. 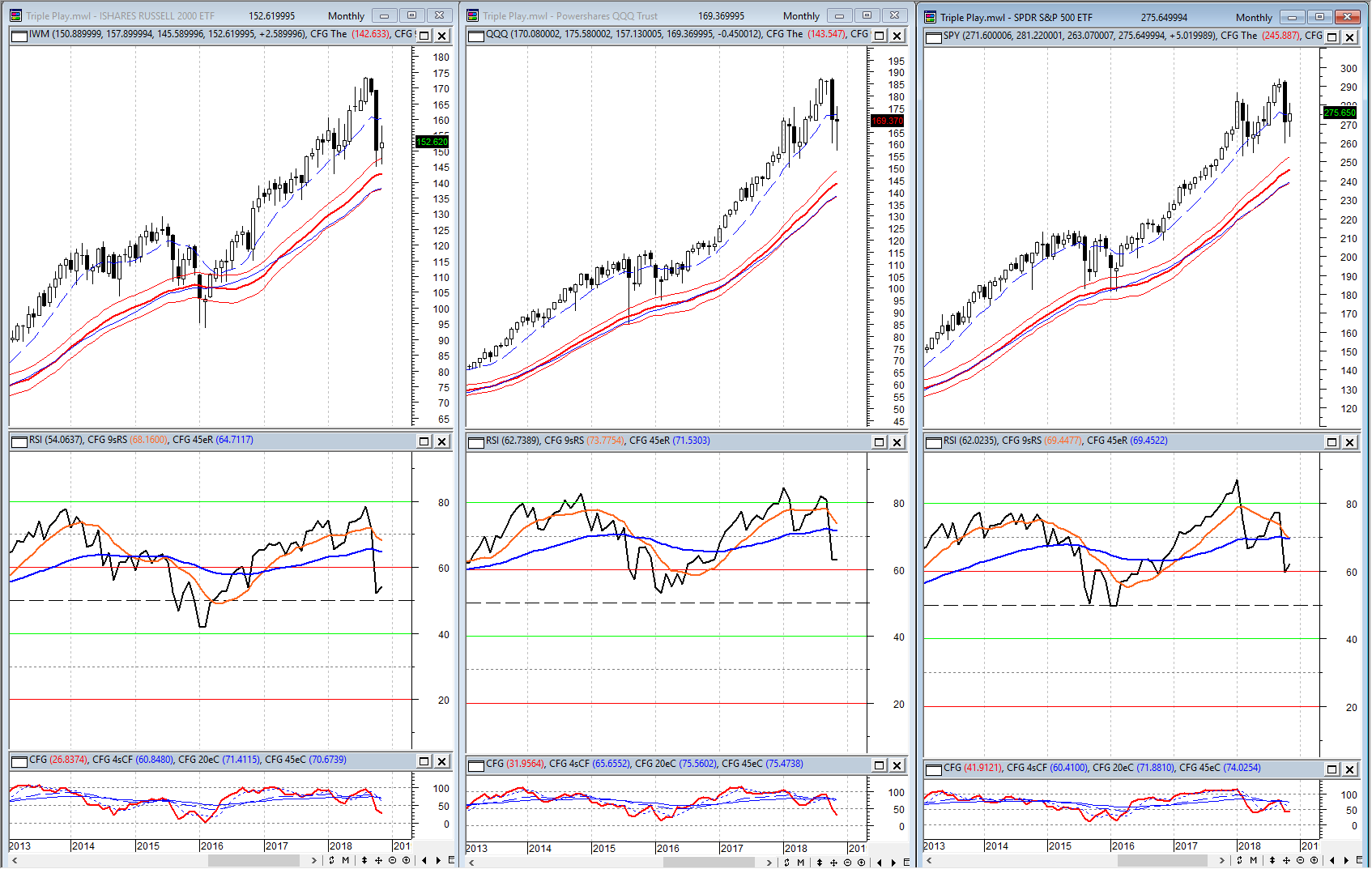 Zooming in a bit on the Monthly we can see the tails are present with this months Doji or harami suggest the selling pressure is waning, but no confirmed reversal showing yet.  One really rough month (and maybe a half) could be it for now if buyers can continue to push back in.  I mentioned early October I was expecting a short and sharp correction this time since the one early 2018 became drawn out for months. While I was wrong on when it would begin (not helpful), we might be seeing that play out here still.  At the depths, in mid November during the retest with the fear palpable, this scenario also got tested, but remained a viable scenario.  Now we are seeing long tails, potential candle reversal patterns and RSI positive reversals set up after working off overbought readings quickly.  A confirmation candle is needed for the reversal candles, but the stage is set.   Longer term charts should carry more weight and should be respected until disproved or negated. This market could certainly go either way still (and likely could test those tails a bit more sometime in December) which is why we should be on guard for a failure.  However, if this were a daily chart with the same look, I would be seriously considering as a reversal candidate.  It’s not a daily candle, and I don’t want to wait a month before making any more decisions, so lets keep working down a level at a time.  The weekly view shows a little more detail in the battle going on. 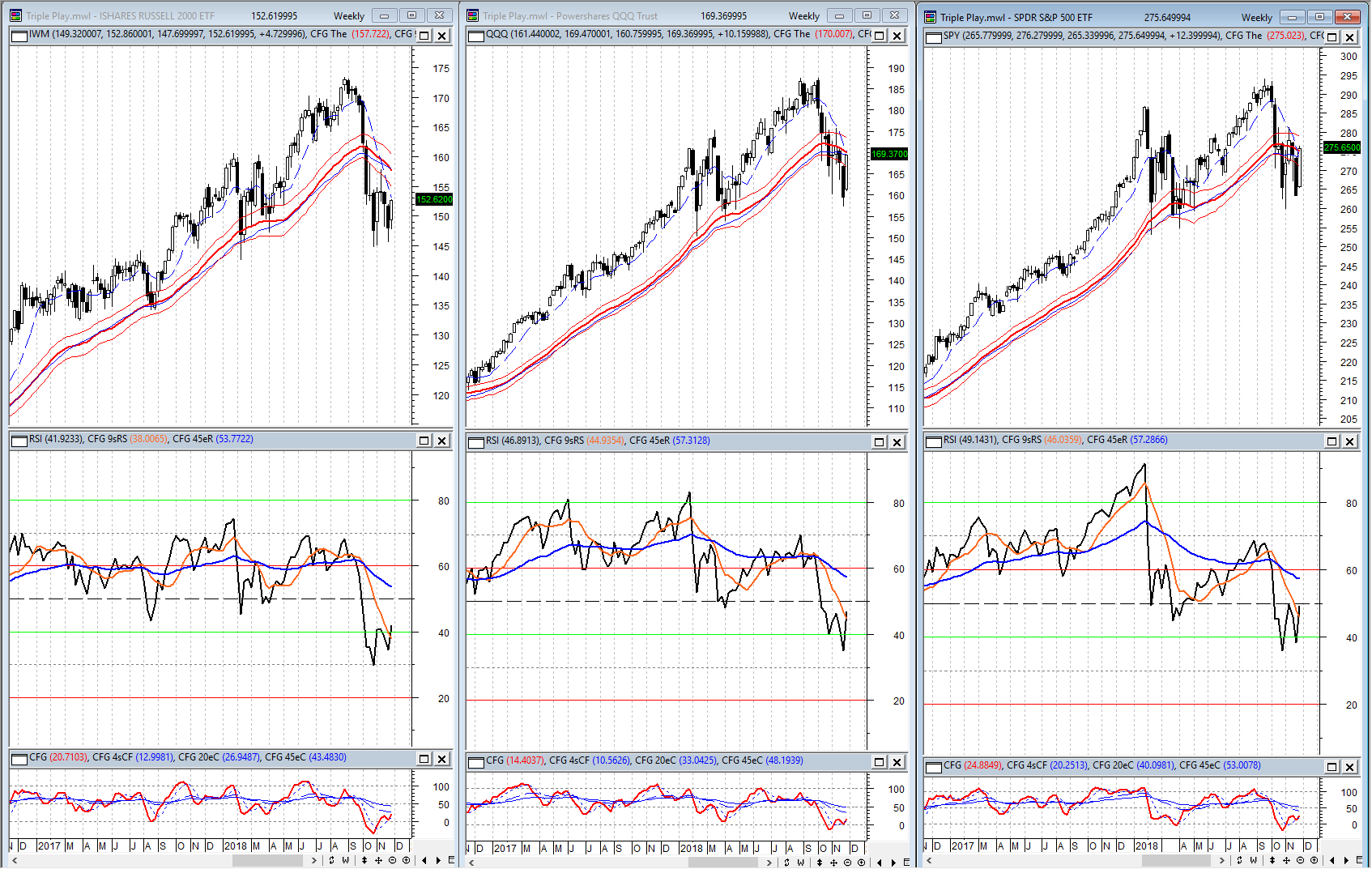 Above we see all three had moved below the MA Bands while RSI lost 40 and moved out of the bull ranges; both are bigger negatives for the intermediate time frame.  Since going under those a over 6 weeks price found a low and got rejected by the MA bands on the first trip back to test the underside of them.  After that rejection, we then held the lows (for the most part) while RSI and CFG momentum indicators have began to improve.  $QQQ made a lower low, but recovered that quickly this week.  $SPY put in a tight RSI positive divergence right near the 40 level as we closed the week.  Again a mixed picture; the momentum indicators are in a spot we could expect more improvement from here, but until we get back above the MA bands and then over 60 on RSI  these moves higher are still suspect.  We closed the week in the MA bands which are close to the top of the small ranges we formed as the markets retested the lows.  Below we look at the 1st breadth chart showing the New High, New Low Differential provided some support to the successful retest idea. 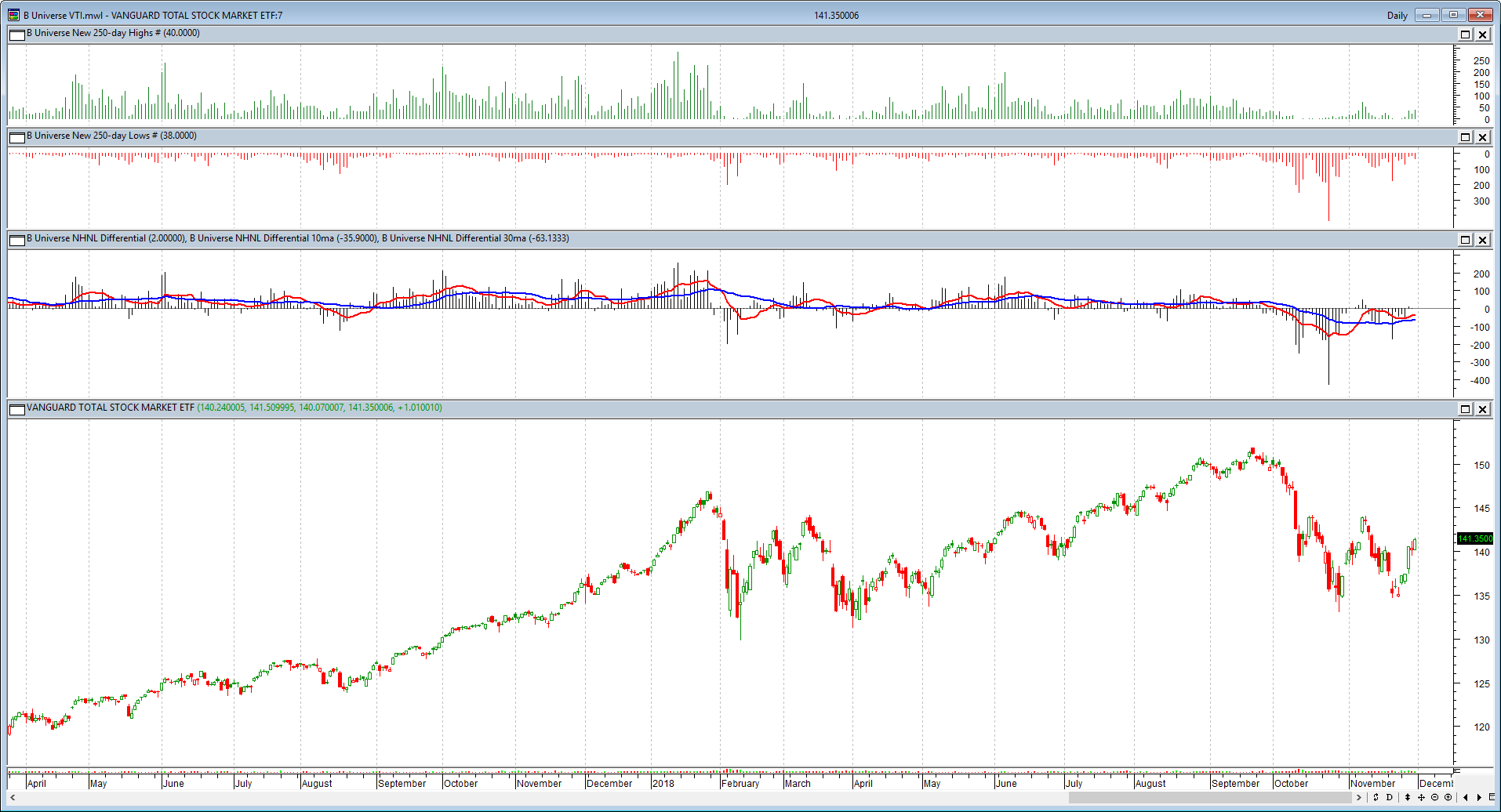 These breadth chars are shown on daily data using $VTI Vanguard total market index as the price component.  It shows the stronger increase in new lows and drop in the differential into the October move lower, but as we moved back down to restest in November those new low numbers we substantially reduced.  Even if not an official divergence, this large reduction is a net positive for the market internals at a tough time.  I do need to note that this charts is still showing 2 of 3 sell signals as the moving averages remain below zero, but are moving up some after the recent strength.  The NHNL itself turned positive late week, but still not strong positive readings, which is similar to other longer term breadth readings which are just not reacting much yet.  The MA Breadth chart also shows the lack of movement in longer term measures, but the shorter term started diverging into the original October lows and never even got close to those lows in November suggesting participation was ready to start improving and help support the reversals. 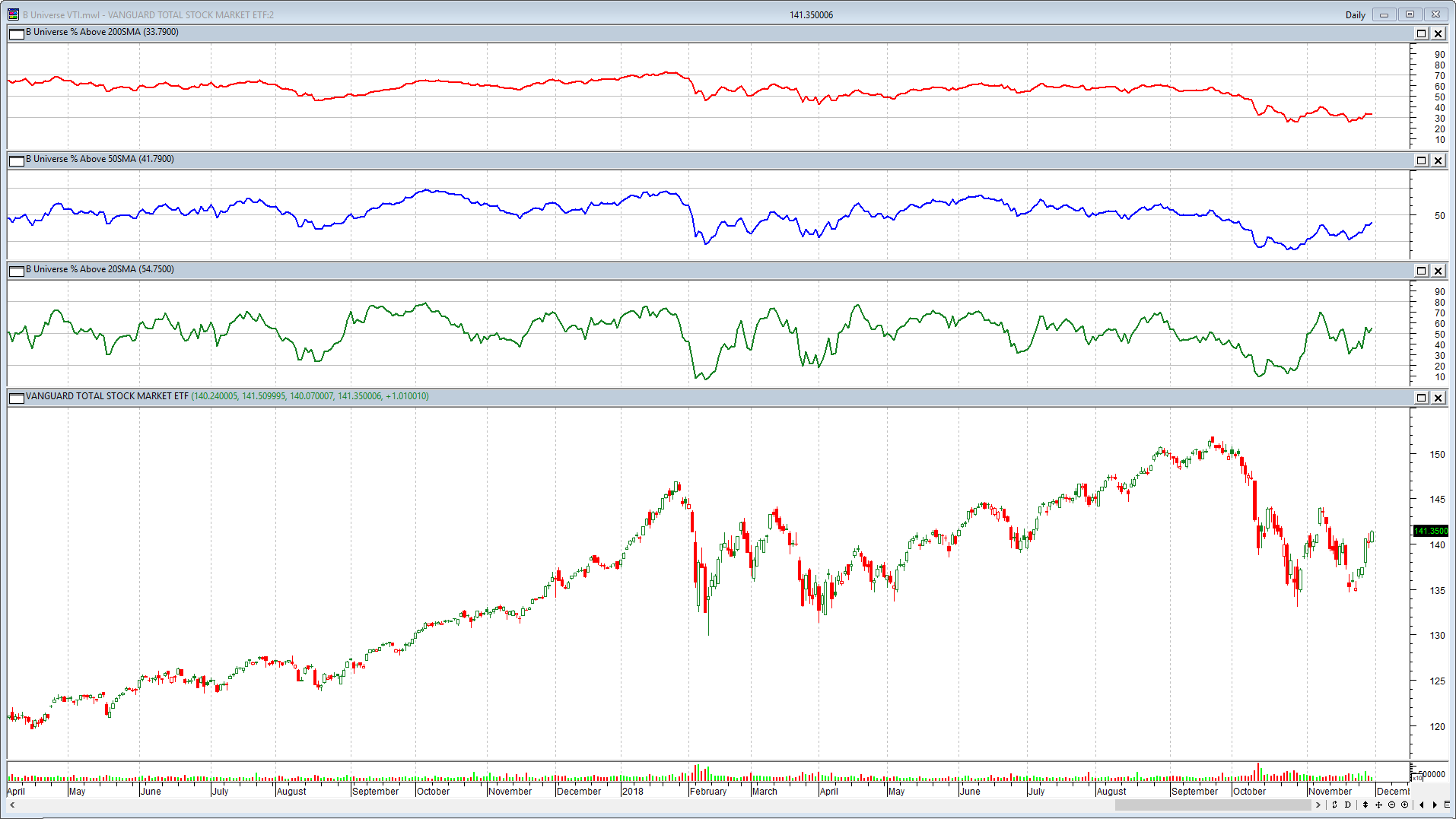 Back to the Daily TP Chart below we can see that bounce started slow and then kicked in Wednesday with an 80% up day as price put in a very strong candle.  Even better, the next day we didn’t see it all and more given back.  Most recent rally attempts have been met quickly with heavy sellers which didn’t happen at the end of the week.  A notable change in character.  From an RSI perspective though, the daily view is in a RSI bear range and below the MA bands and hasn’t made a higher high, so other than the positive divergences, this level is still somewhat questionable and needs to be on watch for how it digests the recent move.  Soon we should see it either consolidate these gains or see an resurgence in sellers that cause another failed move which is exactly what market bears feel we are set up for sooner than later. 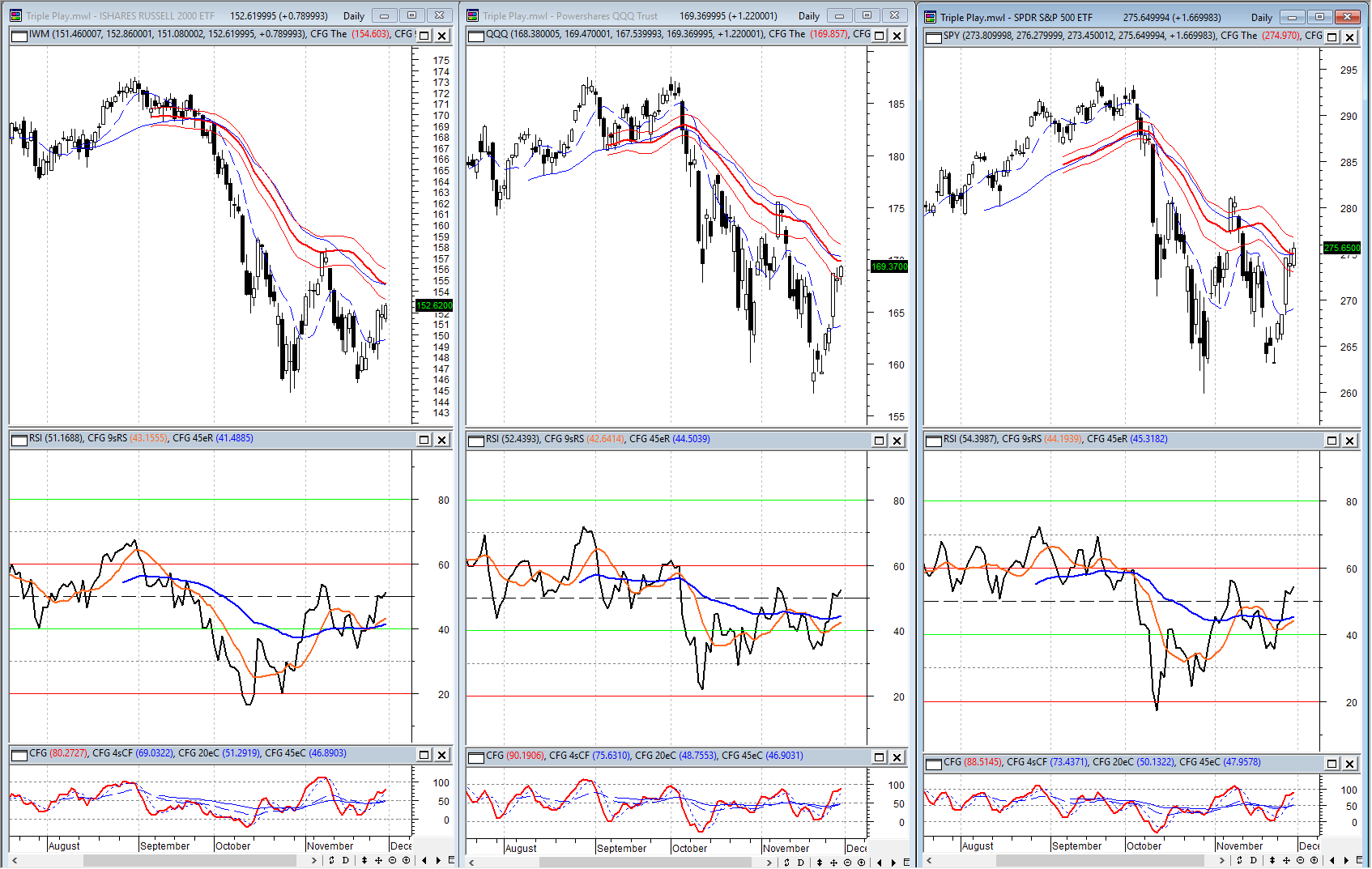 Now on the bullish side, some are also already calling for double bottoms, but we won’t know that until we see how a test of the middle peak goes, which is also likely to be near where RSI will reach the 60 level.  Over it and we get a higher high, confirmed double bottoms and RSI bull range shifts.  I see that resistance as a big key to how the end of the year shakes out, but we may also have to deal with a some earlier resistance here at the MA bands.  With the price action improving, but not over the hump yet on the daily time frame, we look back to the breadth side with the McClellan chart. 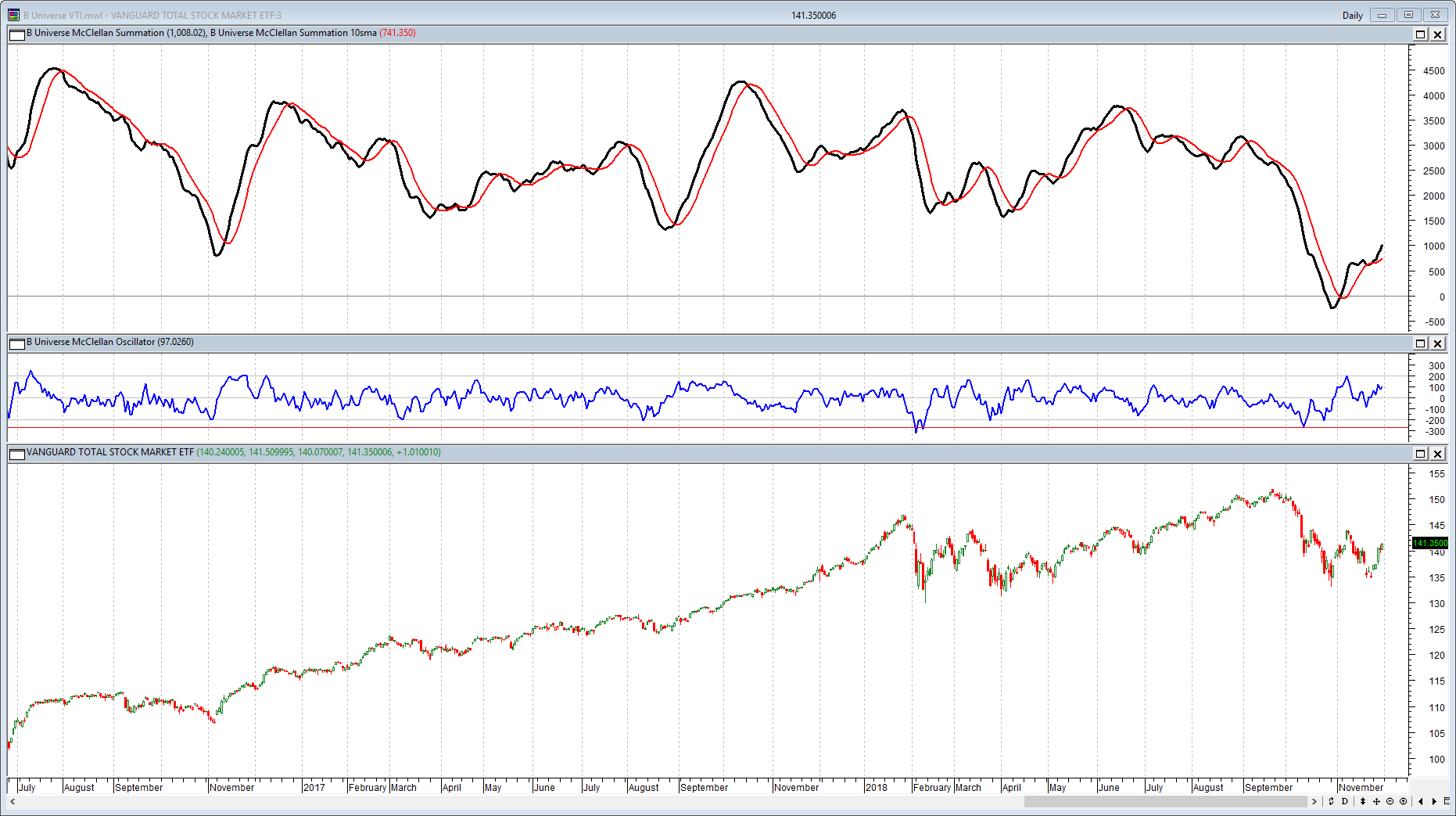 As most of you know, McClellan Summation is one of my favorite intermediate breadth indicators and when coupled with Oscillator divergences at extremes, it can be very hard to beat.  Well, that combination came during the 1st lows in October.  It was one of the big reasons we stuck with the retest idea in November and didn’t get too far into the falling off a cliff mantra that was going around.  You can’t ever know if a signal is going to work or fail, but Oscillator divergences from extremes don’t come along that often and when the Summation is below zero their efficacy goes up.  It also helped that the Summation Index barely budged on the November trip back toward the lows.  Under the surface strength showing up in the breadth numbers here adding some support to the intermediate term view as the daily charts try to shore up. 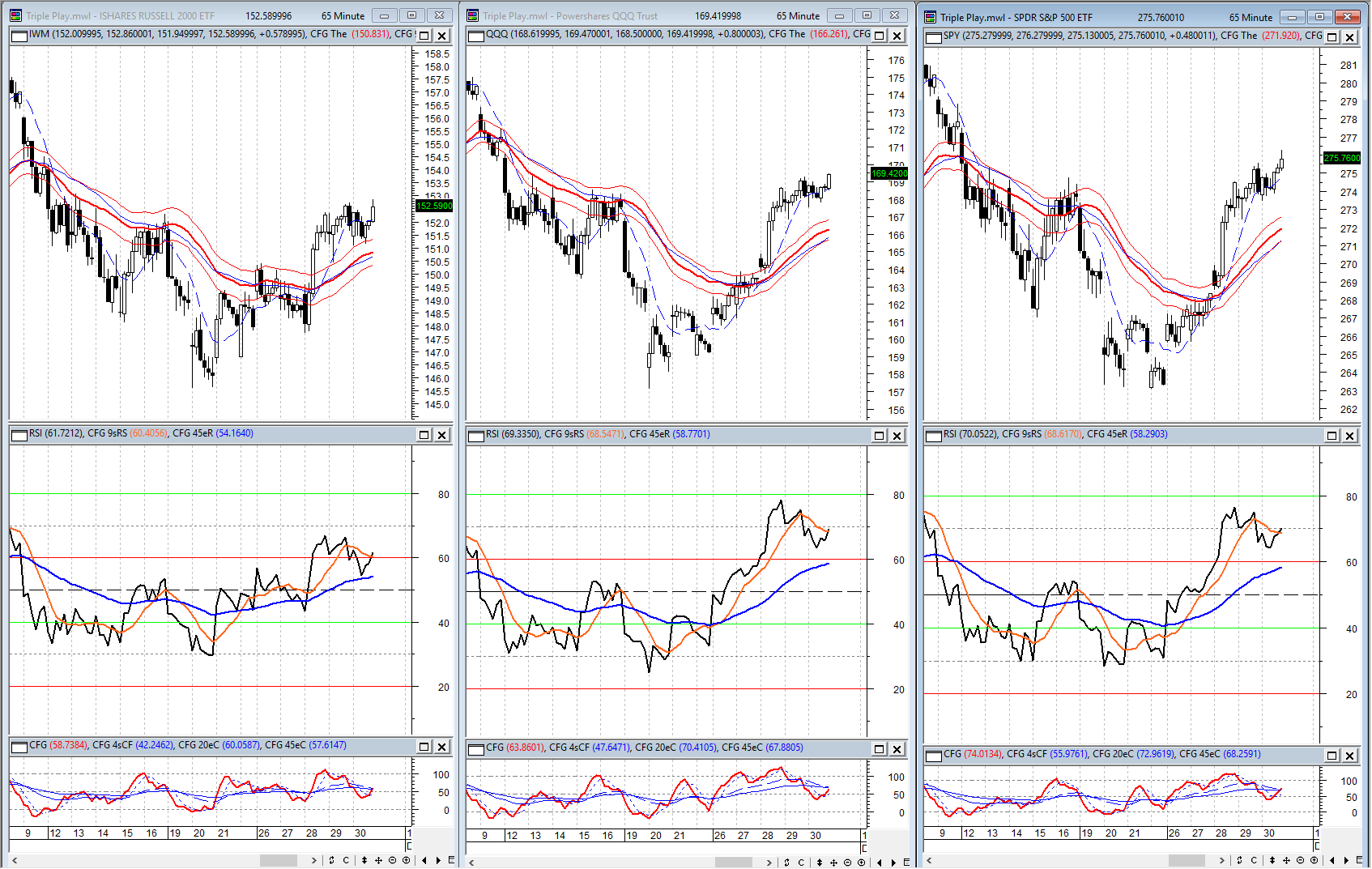 Our final chart drops down to the 65 minute time frame which is the lowest on the totem pole, but also has turned decidedly bullish over the last week.  This chart cleared the MA bands, turned them up and shifted to RSI bull ranges during this week.  We are even seeing price holding up well as the RSI & CFG indicators work off their overbought readings and fire new RSI Positive Reversals exemplifying strong price momentum  that is not waning here yet.  This is the first time frame we watch for character change in the markets and we did see that over the last week, now let’s see if it has enough staying power to move up and help shift the daily, then weekly, then possibly monthly charts back into their own RSI bull ranges.

It is pretty easy to make an argument here for both the markets to continue higher and eventually retest the old highs from late Summer or for sellers to re-assert themselves into resistance, make another lower high and then push to new lows.  After the October drop, there are many that are looking for the latter scenario, and we need to be ready in case we do start to see buyers fizzle out here soon, but don’t count them out just yet.

Good Luck and I hope this helps!

If you like what you see, follow me on StockTwits or Twitter.
(All market data above are derived from Stockcharts.com, Esignal, and Reutersdatalink)
The information set forth here was obtained from sources which we believe to be reliable, but we do not guarantee its accuracy.  Neither the information, nor any opinion expressed constitutes a solicitation by us of the purchase or sale of any securities or commodities. I or my affiliates may hold positions or other interests in securities mentioned in the blog.  Full Disclaimer
There is no guarantee that the views expressed in this communication will become reality,  Investing in the stock market involves risk and potential loss of principal, Investment strategies should be thoroughly researched and understood before implementing and none of this should be construed as a recommendation